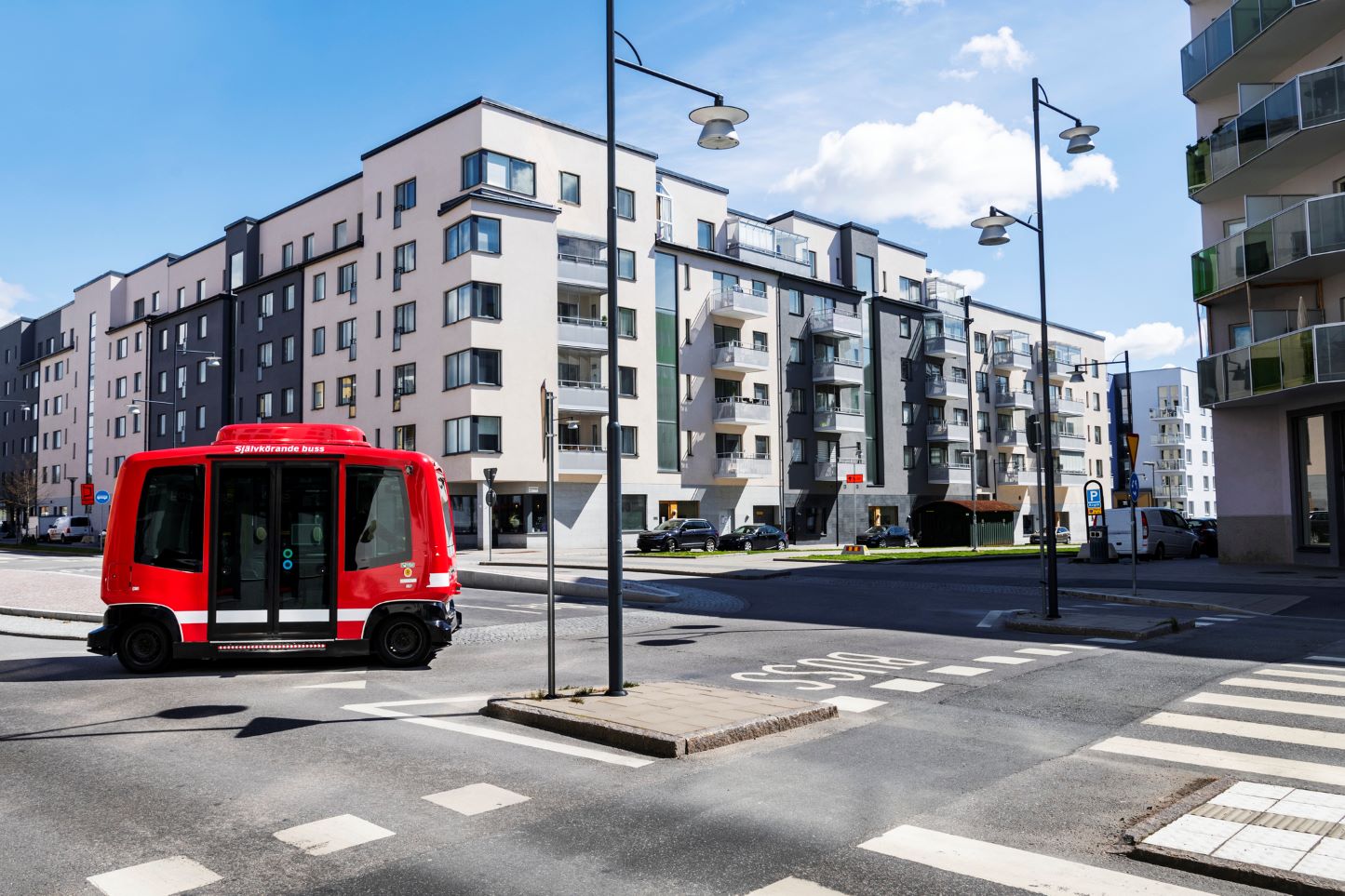 An autonomous driving shuttle hits the road in Sweden

A new option in public transport systems, which provides unexpected ways to integrate and interconnect with existing mobility infrastructure and neighborhoods

Autonomous vehicles (AVs) are yet another sci-fi technology that has leaped off the screen and into our city streets. Much of the conversation has centered on the car, but soon we will start to see a technology trundling across our urban landscapes: the AV bus. And why not? They can bring a host of benefits. They tend to have lower operating costs than traditional busses, and can also be safer than traditional options, as sensors and cameras reduce instances of human error. There can even be environmental benefits- for systems that use gas vehicles, the reduced amount of sudden stops and accelerations that mark human driving would give fuel-driven AV buses a lower emissions profile with their smoother accelerations and decelerations.

AV buses, however, are not without their challenges. Much of the operating cost savings are driven by lower labor costs, primarily resulting from redundant human drivers. This can activate particularly vocal political interest groups and leaves drivers out on the street on the unemployment line. Fewer human employees also eliminate crucial components of good customer service, particularly when managing accessibility issues that a real-live person can more easily handle.

Given this, let’s see what it means for those of us taking public transit right now and how it will shape our cities of the future.

An upgrade to a familiar transit mode

We’re all familiar with the sight of public buses on our city streets. It’s a transit option that is affordable for cities to build and convenient for residents to use. What might it look like to add AV buses into the mix? We can find out by looking at Malaga, Spain, where Europe’s first full-size electric bus was launched for a three-week trial in 2021. Using sensors, cameras and GPS technology that communicates with smart traffic lights, the bus made an 8 kilometres trip between Malaga’s city center and its port six times a day from February 20th to March 13th, 2021.

While the bus was autonomous, it was not technically “driverless” as a driver was on-hand during the whole trial to intervene in any emergencies (and comply with Spanish law). The results of the trial are still being analyzed, but it experienced no major incidents, and there are long-term plans to use the service to ferry cruise ship passengers from the port to Malaga’s historic center. Other full-sized AV bus trials are rolling out worldwide, with Singapore launching a trial in January of 2021 and Edinburgh, UK and Michigan, USA in 2022.

In many cities, particularly in less dense areas, one of the key barriers to broader use of public transit is access- the farther one has to walk to access transit, the increased likelihood that they’ll opt for a car instead. It is also often economically difficult for cities to justify using full-sized buses and hiring a driver to serve these areas.

This is why efficient “first & last-mile” options (those that can bring you from a transit stop to your front door) are crucial for any future-facing transit system. Increasingly, planners are looking to AVs to provide these last-mile options. In Contra Costa County, California, the transportation authorities are taking a $7.5 million grant from the US Department of Transportation to undertake the Automated Driving Systems project to pilot autonomous, electric, low-speed minibusses to take passengers to their last-mile destinations.

The first component of the project will connect the residents of a Walnut Creek Senior Center with essential goods and services in other areas, while the second will function as an on-demand wheel-chair accessible hospital shuttle. The long-term goal is to provide small-scale, easily accessible first/last-mile transit options that connect Eastern San Francisco Bay area residents to the larger transit network, such as BART (Bay Area Rapid Transit) trains and busses. This type of transit option is also increasing in popularity around the world. Hamburg, Germany, is launching HEAT (Hamburg Electric Autonomous Transportation) minibusses to provide city residents with more first/last-mile transit options.

As increased attention to first/last mile solutions suggests, AV connections to other forms of transportation support holistic public mobility ecosystems. Helping to support other transit modes will be an important success factor for city transport systems. Using AV buses to supplement and in some cases, even replace elements of the larger existing system can help encourage new and old users to try new technology. One such case is the plan for Jacksonville, USA to replace its aging Skyway system with autonomous buses that can hop on and off the old monorail track onto the city streets.

Leveraging this piece of existing legacy infrastructure is an ingenious way of creating a seamless transit network that adds an exciting new layer to a familiar mode of movement. It will also save the city money- Skyway trains are so old they’d need to be fully replaced, building new monorail track is prohibitively expensive, and tearing down the elevated track would cost tens of millions to do and require paying back a $90 million federal loan the city received for the original project. Innovative projects like this will be an important part of the process of integrating AV buses into city transit systems and help cities and residents understand how they fit into their daily lives.

With smart planning and foresight, cities can leverage AV busses to solve a variety of mobility challenges, from simply cutting costs and improving safety on existing routes to building out whole new systems leveraging the most innovative new tech. Autonomous buses are poised to be a key feature of the innovative, inclusive and sustainable city of the future- decision-makers should be ready to make way.

Joseph Losavio - As Manager for Ecosystem Engagement & Development for Global Cities at Mastercard, he manages engagement for City Possible, Mastercard's global city cross-learning and solution development network. Prior to that, he was a specialist in infrastructure technology on the Cities, Infrastructure and Urban Services team at the World Economic Forum's Centre for the Fourth Industrial Revolution and also worked for several years at Altria Group. He holds dual bachelor's degrees from the University of Southern California and a master's degree from the Johns Hopkins School of Advanced International Studies.

In the film Un colpo all’italiana (The Italian Job), a group of English robbers manage to rob an armoured car travelling with the...
By Federico Gennari Santori
Transports  |  Cities

Kicking off the Italian trial of self-driving buses and shuttles was the city of Merano, through funds made available by the European...
By Infra Journal Newsroom
Focus On  |  Transports

Like trains, but on the motorway: here is “truck platooning”

Trucks connected with each other and with the motorway, in a slipstream like train cars but on rubber tyres, associated with a lead vehicle, thanks...
By Daniele Monaco
Transports  |  Cities

As defined by the World Bank, social inclusion means improving the terms on which individuals and groups take part in society....
By Magdalena Smenda