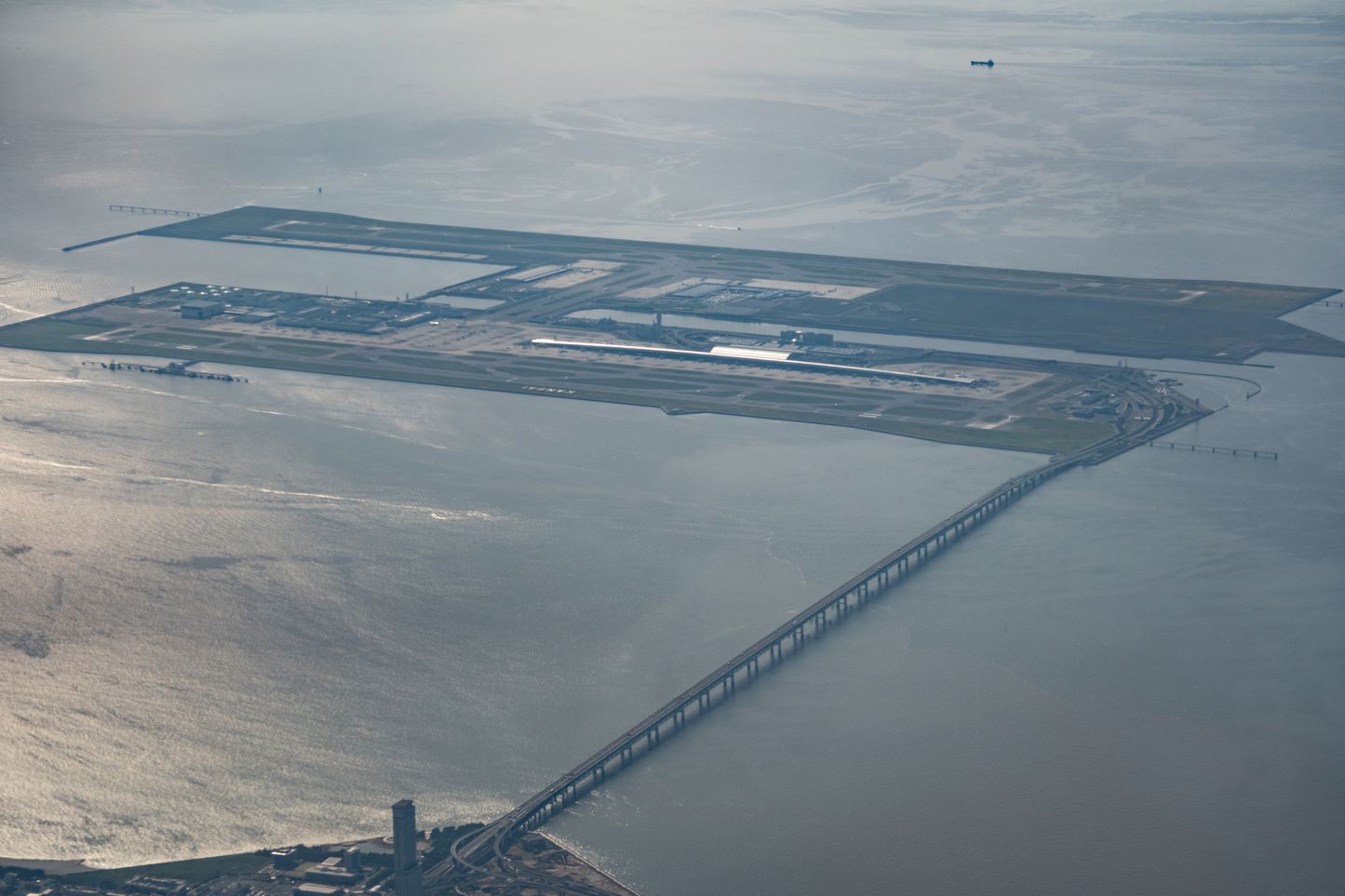 Designed by Renzo Piano, the Kansai airport stands on the third largest artificial island in the world and is considered a monument of 20th century engineering. But increasingly intense geological and climatic phenomena threaten its future

In the 1970s, the Japanese region of Kansai was at a crossroads: most foreign exporters shipped their goods to Tokyo, the economic and financial heart of the country, where the second airport was opened in 1978. The risk for Kansai and its major centres, such as Osaka, Kyoto and Kobe, was to lose international importance, to become too peripheral. It was therefore necessary to find a way to get goods and people into Kansai: in short, a new, large airport was needed. The problem was that none of the cities had the will or the space to build it, and the existing ones were not able to meet the demands of a country so embedded in an economy that was going global.

The idea to overcome the impasse, ingenious but complicated even to imagine, was to build an artificial island off the coast of Osaka, upon which a brand new airport would then be built. Works on it begun in 1989 and ended in 1994 with the inauguration, on 4 September, of the Kansai International Airport, a masterpiece of engineering and architecture, which has become a crossroads for almost 30 million passengers a year, but also a fragile place, whose survival is made even more uncertain by the ongoing climate crisis.

The island upon which the first terminal rests (the second would arrive, on a new adjacent island, in 2007) is over 4 kilometres long and 1.25 kilometres wide. To obtain the earth needed to build it, 430 million cubic metres of rock were taken from two mountains, while to make it stay afloat, more than a million piles were pitched through 20 metres of water, 20 metres of mud, to finally rest on an underlying 40-metre layer of rock. Acting as a breakwater, to protect the island and dissipate the force of the sea, are 48 thousand tetrapods. The passenger terminal, made of glass and steel, is among the longest in the world at 1.7 kilometres and its shape resembles the wing of an aeroplane. The project was designed by Renzo Piano, the architect behind such works as the Centre Pompidou, Potsdamer Platz and the New York Times Tower. A 3.75 kilometre long two-level bridge connects the island with the mainland, allowing trains and cars to transit.

If the construction of the island and the airport was in itself a bold, almost visionary challenge, even more difficult is coming to terms with its uncertain future. When they built the two artificial islands, the planners had taken into account the danger of subsidence, the phenomenon whereby an area slowly sinks under the weight of sediment (the same thing that happens in Venice, for instance). The problem is that today the Kansai airport is sinking at a much faster rate than thirty years ago and, meanwhile, due to global warming, the sea level is rising, accentuating the phenomenon.

In the past, the airport has survived the 1995 Kobe earthquake (magnitude 7) and other extreme events, thanks in part to its strict earthquake-proof criteria, but in 2018 Typhoon Jebi caused a great deal of damage, flooding the runways and forcing the airport to close for two weeks. Subsidence, rising sea levels and typhoons and storm surges made more frequent and violent by the climate crisis are all factors that threaten the survival of the Kansai International Airport: according to a study released in Japan a few years ago, the two islands will reach sea level in 40-60 years. This is also why hundreds of millions were invested from the very beginning to cope with the sinking phenomenon. The coastal barrier has already been raised once, a titanic operation, and from 2019 another project is underway to raise the island by one metre. The disaster prevention item for the airport has a budget of USD 500 million.

Between 2003 and 2007, the second terminal, and thus the second island, was built alongside the first. Overall, the cost of the airport is around USD 15 billion. In order to return the investment, the fees for landing at Kansai International Airport were initially very high: around 10,000 dollars for a Boeing 747, compared to 2,500 at New York's JFK or 8,500 at Tokyo's Narita airport. Over the years, these charges have come down and the airport has become a key reference point in the East. Japan's third largest airport, 28.8 million passengers travelled through it in 2019. Osaka's old Itami airport, the one in the city centre, now only accommodates domestic flights.

In 2001, the American society of civil engineers included the Kansai International Airport among the ten engineering works with the best impact on life in the 20th century, together with works such as the Panama Canal or the Eurotunnel. In 2020 it was the second best medium-sized airport in the world at the Skytrax World airport awards, the best for staff and deliveries. Even with an uncertain future, caught between those who predict its demise and those who plan to build a third island, the Kansai International Airport remains one of the greatest achievements of human ingenuity.

French Guiana is the largest of the five overseas departments: regions belonging to France but scattered around the world. Located in the...
By Gianluca Cedolin
Column  |  Podcast

The People's Republic of China celebrated its 70th anniversary at the end of September and the beginning of October 2019. In addition to a concert,...
By Gianluca Cedolin
Interview  |  Transports

As a society, we are flying more and more. According to the International Air Transport Association, air traffic is expected to double in the next...
By Dave Keating*