Like trains, but on the motorway: here is “truck platooning” - InfraJournal 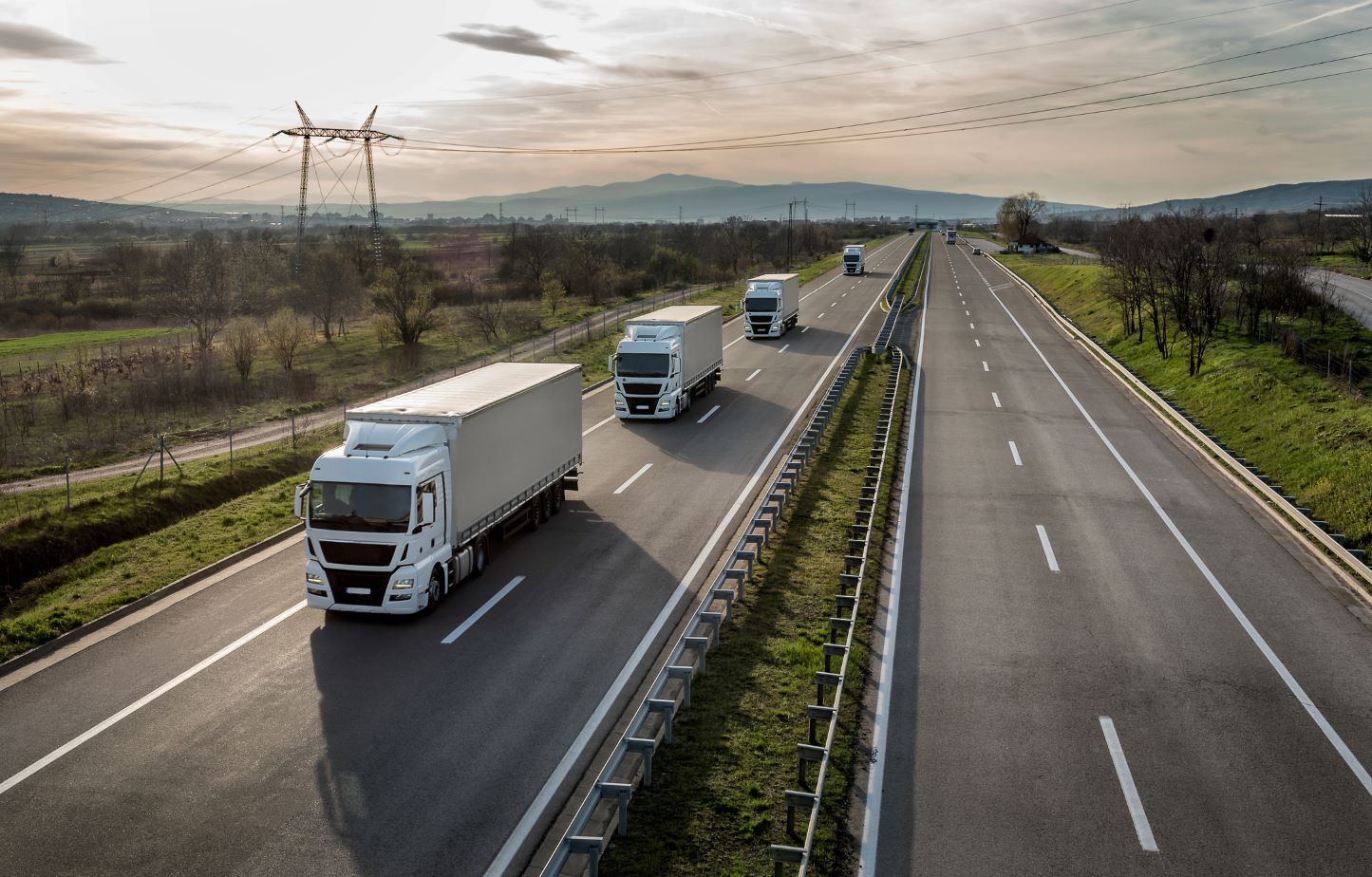 Like trains, but on the motorway: here is “truck platooning”

Seeing a truck travelling without a driver might not be so unusual in the future. Communication and semi-automated driving technologies are already making it possible to create fleets of trucks connected to each other and to the infrastructure to reduce consumption and emissions, increasing efficiency and safety

Trucks connected with each other and with the motorway, in a slipstream like train cars but on rubber tyres, associated with a lead vehicle, thanks to autonomous driving support functions. This is “truck platooning”, which reduces carbon dioxide (CO₂) emissions by up to -16% from gregarious vehicles (-8% from the former), according to a Ertico study, enables automatic braking in one fifth of the time compared to human reaction, optimal road use, faster deliveries, fewer traffic jams, a greater radius of travel for vehicles, and the possibility for drivers to devote themselves to phone calls or administrative tasks, according to the Association of European Automobile Manufacturers (Acea).

“The driving of the future will travel on two tracks, autonomous and connected. Platooning is a precursor of the second aspect, in that the vehicle 'sees' what other vehicles or the infrastructure communicate to it,” explains Luca Studer, Professor of Circulation and Road Safety at the Politecnico di Milano. As a driving support, platooning still requires a driver on each truck to monitor the environment and intervene if necessary; technological challenges and regulatory unknowns still need to be addressed for the advent of autonomous platoons with a single lead driver.

Three experimental projects were held in Europe between 2016 and 2021 on platooning under actual traffic conditions. The first was the European Truck Platooning Challenge, when pairs of single-brand trucks travelled between Brussels and Rotterdam to raise interest in the topic. Last September, near Barcelona, a multi-brand fleet of seven trucks drove in platoon for the Ensemble  project (Euro 25.9 million, Horizon 2020). Three months later ended C-Roads Italy, for the analysis of interactions between platooning and C-Its services, provided by motorway operators.

On the 313 kilometres of the A22 Brenner, 19 km of Autovie Venete and 7 km of Cav, four Iveco trucks covered 300,000 km in platoon to test the V2X (vehicles to everything) communication technologies. Along the motorway, 82 road side units sent alert messages of slow or stationary vehicle, traffic jam, presence of construction site, bad weather conditions and emergency brake lights to vehicles equipped with On-board units, which could interact with the infrastructure (V2I/I2V) and activate “platooning” with other vehicles (V2V). The trial was based on Its-G5, a WiFi network like the domestic ones, but on a different protocol (802.11p), with the possibility for trucks to connect in the cloud via a 4G network.

The system consists of multiple logical layers: operational, tactical, strategic and service. The former controls the vehicle longitudinally and/or laterally as it travels, receiving information from the upper “tactical” layer, where the heart of the “platooning” function resides. Data received from other vehicles are analysed, processed and sent to the lower layer to allow safe driving conditions. The “tactical layer” also identifies the potential partner and makes docking and undocking decisions. The third layer offers “strategic” information to vehicles or convoys (such as the presence of another available, etc.), while the fourth enables services such as “matchmaking” for vehicles travelling alone.

“The development of these logics took years of research and the participation of all European manufacturers, united around the Ensemble project. Each manufacturer manages its vehicle according to its own logic, so there was a need to draw up a standard that would explain the dynamics of convoy management and maintenance when vehicles from different manufacturers came into contact,” explains Valerio Liga, Iveco’s project manager. Convoys can be formed at the start, or a vehicle can hook up as it goes along. “But since the wingmen get the most benefit, how do you organise which truck will be the lead truck? Which one should be followed, trusting the leader for security?” wonders Studer.

“An increased exchange of information makes it possible to maintain the platoon longer, one of the goals of C-Road, but when the security conditions are lacking, it has to disband,” Studer adds. "The greatest risk occurs when the driver regains control of a truck travelling in the slipstream only one to two seconds after the previous one, or when unconnected vehicles 'intrude' into the platoon (cut-in and cut-off phases). This will be a frequent occurrence in the technological transition, but the increasing use of platooning will make traffic smoother and more homogeneous, without those speed differences that cause “shock waves”, self-generated queues and sometimes accidents.”

“Platooning is one of Iveco's lines of research to deliver vehicles that help reduce operating costs, improve safety and have less impact on the environment,” Liga notes. "The formation of a true convoy could enable better productivity, but the greatest impact will not come from platooning per se, but from the advent of advanced driver assistance systems (Adas) and autonomous driving, which will be able to unfold the full potential of the function, with the use of fewer drivers, shorter distances between vehicles in the platoon, better aerodynamics, lower fuel consumption and higher transport density.”

These then are the objectives of Platooning as Autonomous Function (PAF). A first step, not a sufficient one, was taken with Ensemble. “As an autonomous function, the complexity increases,” Liga continues. "New vehicle architectures and redundant systems (braking, steering, power supply...) will have to be developed that take safety requirements into account, the vehicle will have to handle emergencies even in the event of a breakdown, bringing itself to safety and communicating with the convoy, thanks to reliable systems. A specific protocol has been developed within Ensemble, based on the standards of the European Telecommunications Standards Institute, which is currently analysing it. And cybersecurity should be considered, to prevent malicious attackers from controlling the vehicles.”

Further progress is needed, as “implementation in the infrastructure of connected services and C-Its remains patchy.” From a legislative point of view, in addition to the criteria on safety distances and the issue of driving hours, autonomous driving will need to be regulated, “so that these vehicles can be type-approved” and move out of a strictly experimental sphere.

In any case, even if the functionality of platooning does not have a future per se, the studies conducted and the technologies created so far will still be useful in the coming years to foster the advent of a new type of driving. Connected and autonomous.

Autonomous vehicles (AVs) are yet another sci-fi technology that has leaped off the screen and into our city streets. Much of the conversation...
By Joseph Losavio
Mobility  |  Business

Climate policy has become one of the highest priorities in Europe. The European Green Deal reaffirms the Commission’s ambition to make...
By Malika Seddi
Focus On

Within the European economic system, or more precisely, within a space where goods and people move more freely, at an ever-increasing rate and, by...
By Marco Belloli* and Ferruccio Resta
Transports  |  Business

Logistics and ecommerce calling for a new infrastructure

From operational models to warehouse projects, from delivery management to automation 4.0: these are some of the transformations underway in the...
By Daniele Monaco