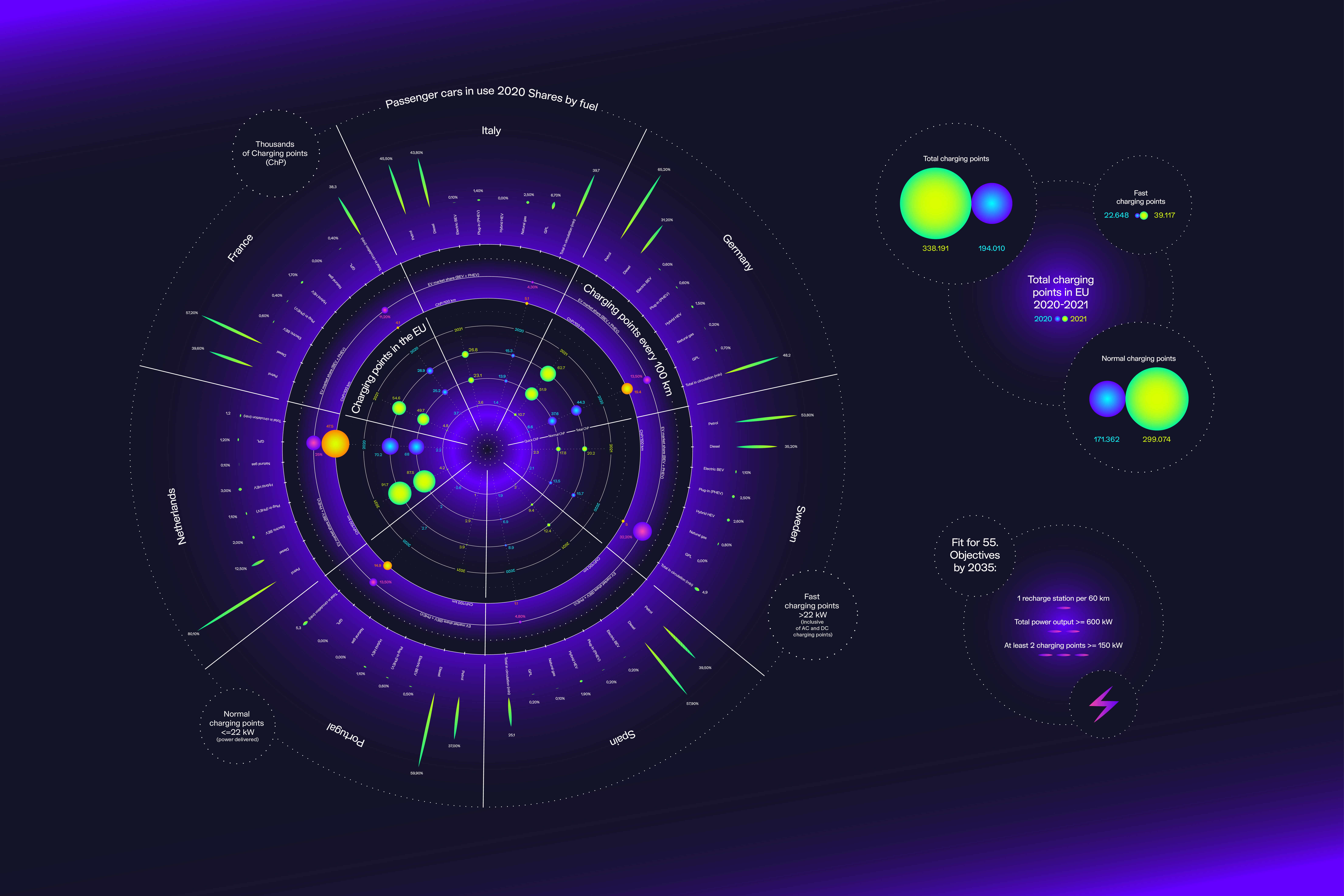 The Green Deal aims at having one million charging points in the European Union in three years, but problems of several types complicate the take-off of electric mobility. The latest deadline for completing the deployment of a modern infrastructure is 2035

Installing a widespread and efficient electric charging network in the European Union to power new commercial vehicles with zero emissions from 2035 and reduce pollution by 90% by 2050: this is one side of the coin, less consumer but more infrastructural, of the fight against greenhouse gases in transport, which Brussels leads with the proposals Fit-for-55 and with the Green Deal.

Electric refuelling facilities are a hot issue among European road users: the ability to access charging points is the greatest concern for 40% of them, when it comes to electric vehicles (Ev), according to a McKinsey survey in 2021. A worry that overcomes the perplexity about the car’s range between refuelling (38%), battery life cycle (37%) and high car prices (30%), decisive requirements for an attractive electric car market.

Then again, sales of full electric (Bev) and plug-in hybrids (Phev) combined have increased tenfold since 2017, reaching an all-time high of 1.7 million in 2021 (nearly one in five, 18% of the total), while in the same timespan the number of charging stations has only grown 2.5 times, according to the European Automobile Manufacturers Association (Acea).

On the one hand, there is the effect of the purchase subsidies granted by the various European countries but, on the other hand, the diffusion of the recharging infrastructure seems to be a race against time. According to estimates reported by Acea, from now until 2030 it will be necessary to install up to 6.8 million public charging points, at a rate of 14 thousand per week, much more than the current roughly 2 thousand and at a rhythm twice as fast as that envisaged by the Afir proposal under discussion between the European Parliament and Council (the Commission reported the estimate of 3.5 million, for 2030). However, the first target on the horizon of one million charging points set for 2025 by the Green Deal has to deal with the 338,191 total charging points present in 2021 (European Alternative Fuels Observatory), increased by about 132 thousand units compared to the previous year.

The “single output” power can be as high as 350 kW in some cases (direct current power charging points), and this is not an insignificant detail, as it relates to the possible recharging speed, while the market offers increasingly modern and high-performance electric cars. It’s not just a matter of quantity (and diffusion), but also the quality (and user experience) of the network of stations on the territory.

For example, an e-car with an average battery capacity of 40 kilowatt-hours (kWh) can be recharged in two hours, at the “normal” charging point (up to 22 kilowatts). Times are reduced with a “fast” column (over 22 kW): for example, with 120 kW of power output, 20 minutes are sufficient. The diffusion of “fast charging points” is however limited in the EU: 8,788 in 2021, compared to 299,074 “normal” ones, as far as it concerns the alternating current (Ac) power plants. In addition, 30,329 direct current facilities (up to 350 kW power), can also be taken into account.

And there is no shortage of other contradictions. Over 60% of all charging points are concentrated in three countries: Holland, France and Germany. The latter alone hosts nearly one-fifth (62,711) of all charging points in Europe, but even there, access to the columns is experienced as problematic (48% of responses). The Netherlands leads the Twenty-seven, with as many as 91,732 charging points (almost one out of three is located here), but just 4,212 of them are “fast”. Not to mention that in France, Italy and Spain, one out of two drivers (47%) say they are frustrated in looking for plug-ins, and 44% express discomfort with waiting times or fear the possibility of finding a non-compatible plug-in.

In addition, the time required for the authorisation and construction of refuelling facilities can be up to twenty months. The most virtuous are the Swedes: three months to obtain permission to mount a 150 kW charging point in Stockholm and seven to carry out the entire installation process, but in Portugal it takes a year alone for the coveted approval.

Paradoxically, the increased demand for column installation has overburdened skilled electricians, increasing waiting times for labour to over a month. Once on site, then, there is no shortage of problems. Not even in Germany, where the fragmented market among 850 electric utility operators requires station distributors to comply with ever-changing processes. Outdated networks, without smart meters as in Slovakia (just 5%) do not allow for the development of smart alternative energy resources to avoid blackouts or waste. Finally, the very governance of energy services can limit investment to a certain threshold established in relation to revenues, proving to be a limitation to rapid modernisation, as is the case in Poland.

State of the art and forecasts

At the moment, the “first party” in the Union is still petrol with about 127.3 million private cars in use (51.7% of the total in 2020). Not to mention heavy vehicles: diesel fuel overwhelmingly wins with 91.2% of vans, 93.5% of buses and 96.3% of trucks and lorries. As of 2020, according to the latest Acea report the private full electric cars (Bev) are 0.5% out of 246.3 million and electric plug-in cars are 0.6%, while put together they made up just 0.4%, in 2019. Nevertheless, according to Ernst & Young projections, annual EV sales will surpass all other vehicles combined in six years (2028). Electric cars in use will total 65 million in 2030 and will be double that five years later. The balance of power between electric and petrol will not be reversed from today until 2045, when there will be less than 1% of thermal engines on the road.

A vision, however, that will not come to fruition on its own. Italy, where the Motus-E association counts 253,514 Bev and Phev circulating cars (February 2022, split almost 50/50), will allocate a fund of one billion euro per year in the period 2023-2030, to be divided between incentives for the purchase of the least polluting cars and support to the industry reconversion. Similar concerns in Germany, the leading trade partner for Italian automotive component exports, where the government launched a 1 billion euro fund last summer to reorient vehicle production.

As for the development of the charging infrastructure, Rome has dedicated a 741.3 million euro investment item in the National Recovery and Resilience Plan. The estimate is that, to meet European decarbonisation targets there will need to be about 6 million electric vehicles by 2030 (Bev were less than 40 thousand in 2020), for which 31,500 public fast-charging points are needed. Currently, Italy is home to 26,860 of which 3,692 are rapid (2021, Eafo data). The intervention of the PNRR will serve to install 7,500 fast charging points on highways (175 kW) and 13,755 in urban centres (90 kW), as well as 100 experimental charging stations, by 2026.

The latest Motus-E report on “Public charging infrastructures in Italy” highlighted how Italy has more charging points per circulating vehicle than the United Kingdom, Germany and Norway, coming second only to the Netherlands and concluding that “it is the penetration of electric vehicles that lags behind other European countries, not public charging infrastructures”. In addition, according to a previous report of the same association, 500 million euro would be enough to distribute with a different ratio and in three brackets of power (even higher than 200 kW) the same number of charging points, in a homogeneous way on the territory. The remainder would go to charging points of less than 44 kW in low-demand municipalities, or to innovative projects such as smart charging and vehicle-to-grid integration.

The shift towards electric mobility in Europe and the US is both a market-driven phenomenon and a policy goal. This will put under pressure...
By Carlo Stagnaro
Focus On  |  Business

Is electrification putting workplaces at risk? The answer is both "yes" and "no".  The shift towards the electrification of final uses of...
By Carlo Stagnaro
Transports  |  Sustainability

If we roughly retrace the history of the automobile, the last five to six years could be on record as being responsible for the most...
By Maurizio Bertera
Cities  |  Sustainability