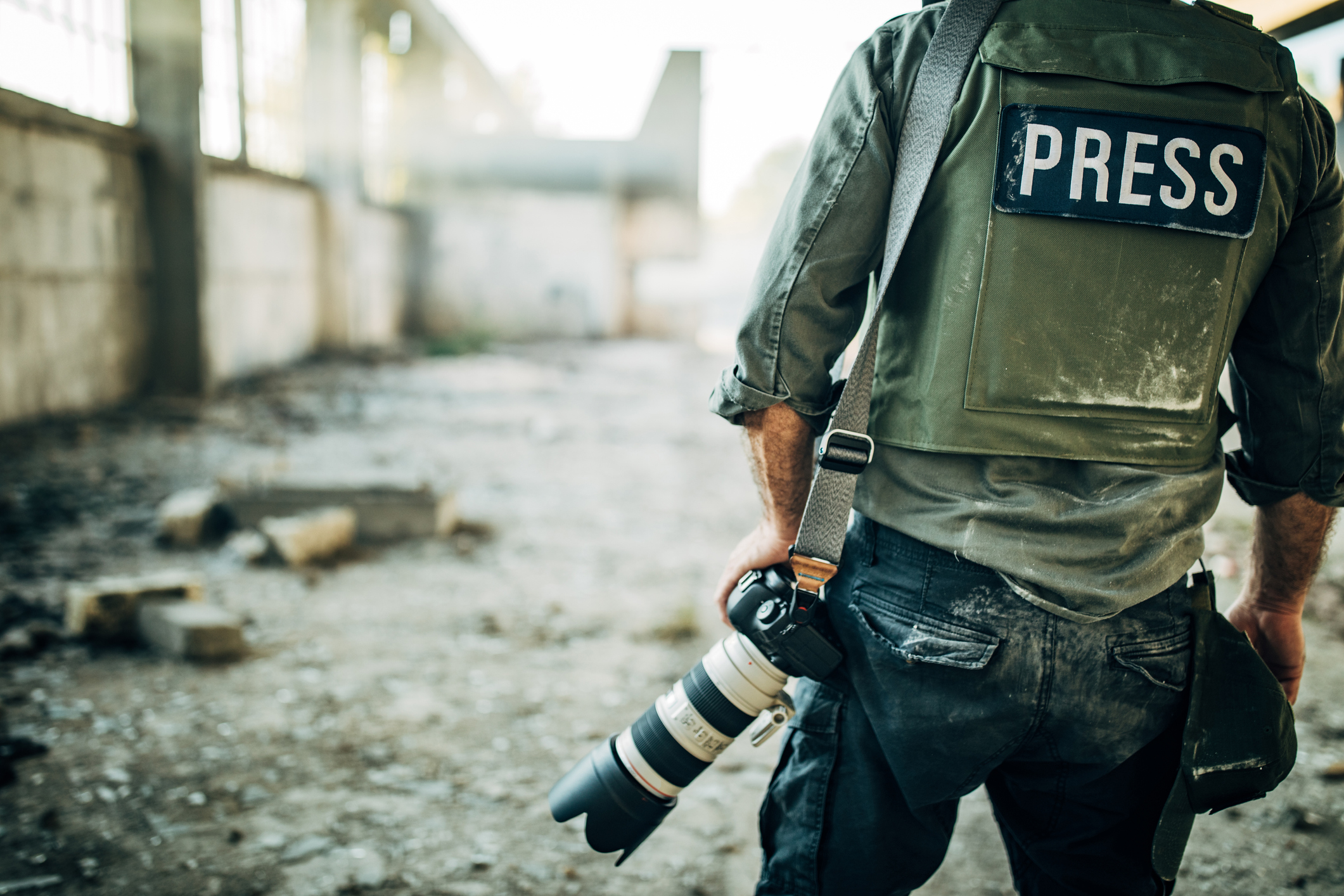 Russian government has forbidden using the word "war" to refer to the war in Ukraine. Journalists risk condemnations up to 15 years in prison

The public digital space is the new battlefield to conquer the public opinion, as the conflict between Russia and Ukraine shows. Such a divergence may lead to a partition of the Internet: the “Splinternet”

When on 16th of January 1991 Bernard Shaw from CNN reported that “the skies over Baghdad have been illuminated…”, the public didn’t know yet that the First Gulf War would be the very first conflict live-streamed on TV. At that time, CNN was the only global news channel streaming information 24/7.

More than 30 years have passed and war still remains in the toolbox of undemocratic governments. Yet, the media coverage of such dramatic events has changed significantly. The Russian aggression in Ukraine is live-streamed via smartphones, and CNN cannot keep up with the information wave that has flooded the public digital space.

For many years now, social scientists have been using the term ‘CNN effect’ to describe the effect that news media have on political decisions taken during the conflict. Given the current digital landscape, it might as well be called the ‘Facebook or Twitter effect’, to refer to how social media influence, by definition, public opinion.

This happens to such an extent that not only the media world changes, but the internet does it too, and what was originally intended to unify the world by design, may be changing in an unexpected fashion. As experts actually predict, the threat of ‘Splinternet’ (the internet splitting into a series of cyberspace segments) becomes very real. Is the new web revolution just around the corner?

Russian state-owned media have been acting in the Kremlin’s interest for many years. The primary target of Russian propaganda is its domestic audience and included rallying nationwide support for the authorities among prominent public figures, ranging from celebrities to representatives of the state-linked Orthodox Church. The propaganda has falsely depicted Ukraine as a godless state run by a "genocidal and neonazi regime".

The narrative during the 2022 war is evolving fast as the expected quick victory has not come. The Kremlins’ disinformation and propaganda have to work hard to hide the ground reality. The strategy? First, to present all the news coming from the Ukrainian side as fake. Second, to convince the Russian audience that Kyiv poses an imminent threat to the Federation. The method? Recycling old, well-known, yet still effective narratives. Using existing digital platforms for their own purposes. Undermining Ukrainian credibility and banning unfavorable content.

The widely-cited Major General Igor Konashenkov stated that “a military biological program [is] being implemented in Ukraine, funded by the US Department of Defense”. It is noteworthy that the Kremlin used a similar narrative in 2020, blaming the US for starting the COVID-19 pandemic. The pro-government media suggested then that the virus had been manufactured in Maryland (US). Additionally, Russia has justified the takeover of the Chernobyl nuclear power plant as a preventive measure taken to inhibit the construction of a so-called dirty bomb. All of this, implicitly, justifies Russian actions and portray these measures as defensive, not offensive.

Even though the internet media giants like Google, Facebook, Twitter and TikTok have tried to fight content linked to Kremlin’s disinformation, they have failed to control it all. A lot of Russian influencers presented the aggression as a “special Russian operation with the aim of denazification in Ukraine”, via TikTok. As the first sanctions were imposed and major fashion luxury brands pulled out of Russia, some social media figures reacted with anger. The video of Katrina Klimova, whose Instagram account is followed by 6,7 million users, destroying her luxury brand clothes, crashing her iPhone and throwing out a pair of Prada shoes, went viral. The message was clear. Russian people don’t need the West and despise it.

A lot of content was used out of context to undermine Ukrainian credibility. Moscow’s supporters have been massively sharing low-quality footage of alleged atrocities and military vehicles via social media. Many of them are reused photos and clips from the previous conflict. According to the International Fact-Checking Network, it has been a highly coordinated operation aimed at confusing the public. For example, a photo of two children waving Ukrainian soldiers off to the frontline was shared by Ukraine’s Ministry of Defence in 2016 and has nothing to do with the current situation.

Russia doesn’t spare digital platforms, either, as the Kremlin has restricted access to Instagram, Twitter and Facebook. What is more, Russian prosecutors accused Facebook of being an “extremist” organization and opened a criminal case against Meta, its owner. Moreover, Roskomnadzor, the Russian regulating body for the internet and communications, has threatened journalists with bans and fines if they tried to write about Ukraine using other sources than the official ones.

The results? As Jānis Sārts, director of the NATO Strategic Communications Center of Excellence put it in Politico, "Russia has lost the information war in the West, fair and square". Despite the West being lost, however, Putin’s personal approval rating rose to 71% in the days following the February 24 invasion, as reported by the polling agency FOM. It looks like the hearts and minds of Russian citizens have been conquered by the Kremlin’s propaganda.

The other side’s perspective

For Ukraine, both the traditional and new media have turned out to be equally powerful tools. Unlike the Russian propaganda, Ukrainian authorities understood perfectly that the message should reach not only Ukrainians but also the Russians and the world’s public. President Volodymyr Zelensky, an ex-comedian himself, was well-aware of the power of an image and his daily one-man shows have become iconic.

Image no. 1. Zelensky, standing in front of the presidency building, surrounded by his close collaborators, assuring that “We are here. We are in Kyiv. We are protecting Ukraine”. The video lifted up Ukrainian spirits and mobilized the nation for the defence of their country.

Image no. 2. Zelensky’s live-streamed powerful speech to the European Parliament, during which he plead eurocrats to “prove that [they] are indeed Europeans”. It was followed by a long-standing ovation. As a result, MEPs urged the EU to accept Ukraine as an official candidate for EU membership.

30 years ago, without the internet and videoconference, his appeal would have reached only diplomats, while the wide public would have stayed untouched. Right now, the footage of bombed buildings and bridges, of ordinary citizens preparing Molotov cocktails, of soldiers getting married in the army’s uniforms, reach everyone. Millions of views on digital platforms have translated into millions of people protesting against Russia’s aggression on the streets of cities in Europe and the whole world.

A fragmentation of the internet?

The Russian invasion of Ukraine became a turning point for the internet and the digital world. Digital platforms, allegedly neutral, have taken their stand and responded. Twitter started labelling content from Russian state-affiliated media websites. Facebook, Google and YouTube banned Russian media from advertising on these platforms. Upon the request of EU members, Meta and TikTok have restricted access to Russia Today and Sputnik across the Union. According to BBC Business, both Twitter and Meta have set up a special team monitoring content for misinformation so the rule-breaking entries are removed faster. The major platforms are still working on their modus operandi when it comes to the prevention of misinformation.

Some analysts estimate that this war may cause fragmentation of the internet. As Kamil Mikulski, a senior hybrid threats analyst at the Kosciuszko Institute (a leading non-governmental and non-profit think tank and research institute in Poland), points out in conversation with Infra Journal “the internet fragmentation (‘Splinternet’) means a division of the World Wide Web due to strategic political, security, technological, or religious issues”. As Mikulski further explains, “the effective separation can take various forms, such as using only domestic domains, transferring foreign domains to local, or blocking direct foreign server hosts. The cut-off is not absolute, however. Unrestrained or largely free access to the global internet is typically reserved to administrative apparatus, while other denizens have to abide by limitations or intranet. What is interesting, countries with the lowest internet access rank frequently low on human freedoms indices (e.g. Iran, Syria or Myanmar).” It looks like the Russian Federation is already a part of this infamous list.

Magdalena Smenda - Institutional donor relations specialist at Polish Humanitarian Action, she graduated from National Security and Public Administration at the Jagiellonian University in Cracow, and from European Political and Governance Studies at the College of Europe in Bruges. She was granted a scholarship from the Ministry of Foreign Affairs in Poland. She is an alumnus of the European Leadership Programme in Brussels and the School of Leadership in Warsaw. She gathered her professional experience at the Embassy of Poland in Paris, Investment and Trade Agency in Warsaw, Ministry of Foreign Affairs in Warsaw, European Commission in Brussels, international non-governmental organisation CIDSE in Brussels and foundation Kids Rainbow in Gaziantep, Turkey. She collaborated with Kurier Europejski (Polish branch of New Federalist Magazine) and Duel Amical. She is fluent in Polish, English and French.

Has globalization come to an end? Many believed the world order that emerged from the collapse of the Soviet Union in 1991 would not survive...
By Carlo Stagnaro
Interview  |  Mobility

During a war, communication routes are among the first infrastructural elements to be the focus of occupation, expropriation and...
By Teresa Bellemo
Sustainability  |  Business

One of the effects of the war in Ukraine has been adding new political significance to the reasons why the European Union is...
By Ferdinando Cotugno