Oyapock: a bridge to connect Europe and South America - InfraJournal 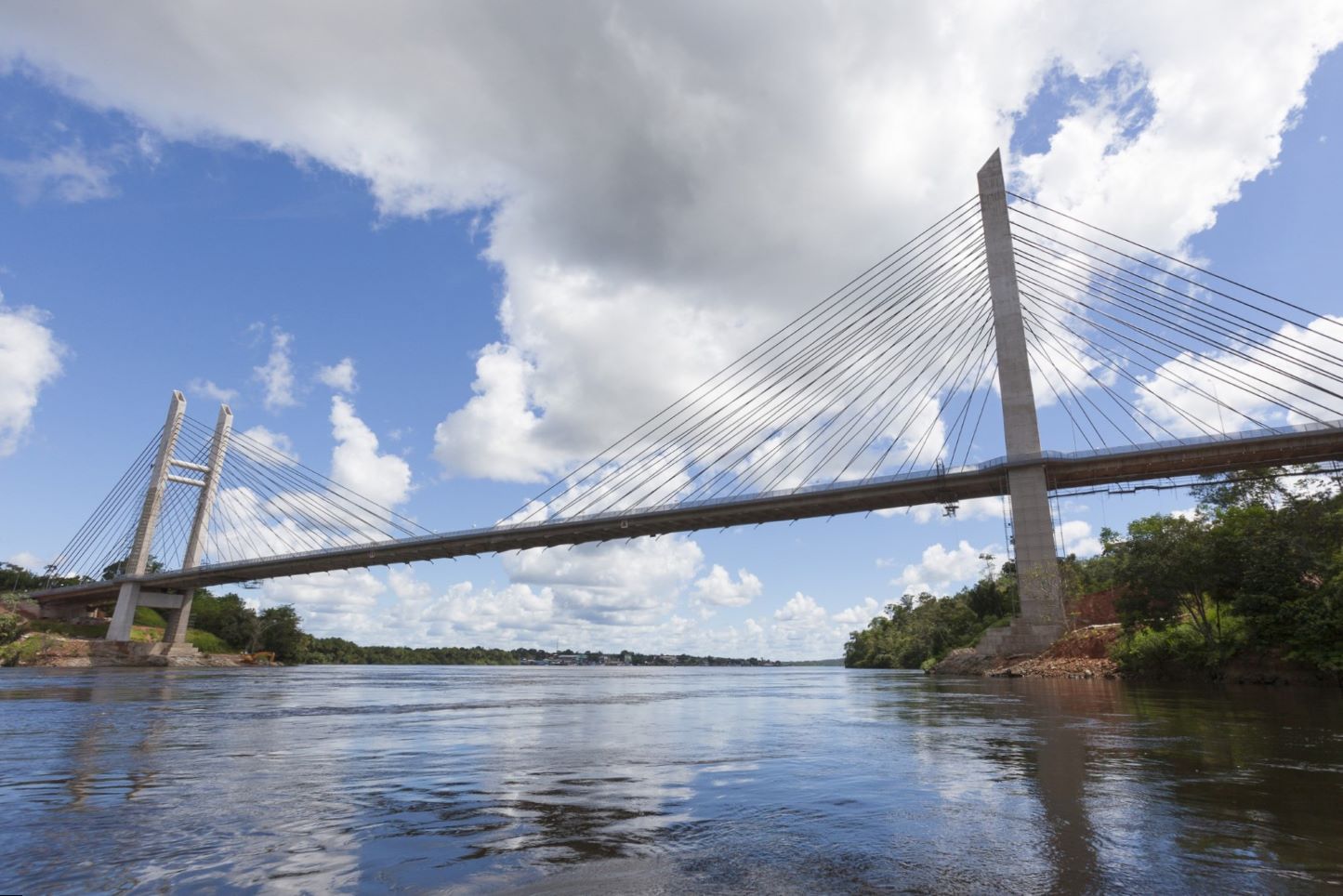 There is a land border between France and Brazil: French Guiana. It was made possible by a bridge over the Oyapock River. It took 20 years to complete the project, but it was finally opened to traffic in 2017

The Oyapock bridge between Brazil and French Guiana

French Guiana is the largest of the five overseas departments: regions belonging to France but scattered around the world. Located in the northeastern part of South America, it is almost exclusively wilderness, with 96 percent of its area covered by forest, fewer than 300,000 residents and a density of three inhabitants per square kilometre. To the south and east, the Tumuk Mountains and the Oyapock River (Rio Oiapoque in Portuguese) separate Guyana and Brazil. Until a few years ago, one could only cross over the border by boat, but in 2017 the Oyapock Bridge was inaugurated. Because of Guyana's unique administrative condition, and with little propaganda imagination, the bridge can be considered the first and only physical connection between Brazil and Europe.

The idea of connecting Guyana with the remote Brazilian state of Amapá came about in the 1990s, out of a desire to bring these two places out of isolation, both of which are far from central government, lacking infrastructure and underdeveloped. The two founding fathers of the bridge were undoubtedly Antoine Karam and João Capiberibe, then rising stars of the Guyanese and Brazilian socialist parties. Their political action led to the Guyana-Amapá Cooperation Framework Agreement, signed in 1996 by French President Jacques Chirac and Brazilian President Fernando Henrique Cardoso. At this meeting there was still no talk of a bridge, but rather of the construction of two roads, one to connect Saint Georges (the Guyanese town overlooking the Oyapock) with Guyana's capital, Cayenne, and one to join Oiapoque (the Brazilian town on the other side of the river) with Macapá, the capital of Amapá. Instead, the bridge was mentioned for the first time the following year, on 25 November 1997, when a day of renewed friendship between Brazil and France was celebrated in Saint Georges, again prompted by Karam and Capiberibe; an important occasion to increase international attention regarding the situation on that border.

However, another eleven years would have to elapse before construction of the bridge could begin, which was decided on in 2008 by Nicolas Sarkozy and Luiz Inácio Lula da Silva. Work finished three years later, in 2011, but the bridge was not inaugurated until 2017, after a long series of problems and controversies.

The bridge is 378 metres long and is divided into three spans: two side spans of 66.5 metres, and the central span of no less than 245 metres, which is crucial in allowing ships to pass underneath unimpeded, given the speed of the current and the depth of the river. It is a cable-stayed bridge, in which there are long steel cables anchored to the tops of two pylons that support the deck. The structure of the bridge, designed by Italian engineer Mario de Miranda and costing about $50 million, is entirely in reinforced and prestressed concrete. This was a large and logistically difficult project due to its location in the Amazon region, an area surrounded by forests; to have completed it in three years is undoubtedly a great engineering achievement. Before opening it to traffic, however, there were many things still to be fixed.

On 27 February 2015, in the Folha de S. Paulo, Brazil and South America's leading daily newspaper, an editorial came out entitled Ponte nada pontual, an apt calembour to recount the delays to the work’s inauguration. There were two main problems: the slowness, on the Brazilian side, of creating all the necessary facilities for a transcontinental border crossing, and the backlog of construction work on the road between Oiapoque and Macapá, which is still unpaved, slow and dangerous for large stretches. Connected by a bridge to Guyana, therefore to France and Europe, Oiapoque remains far removed from the rest of Brazil, being hundreds of impervious kilometres from major cities.

One of the disputes that arose at the end of the work concerns the lack of reciprocity in the requirements for border crossing. Whereas the French could enter Brazil without a visa and stay for three months, Brazilians needed a visa to cross over to the Guyanese shore. The reasons for this decision lay in the French government's fears of a massive influx of illegal Brazilian labour to work in Guyana's clandestine gold mines. A France24 article published in 2012 and titled Oyapock: the bridge to discord? spoke of 60 border policemen engaged in surveillance in Saint Georges and about 5,000 illegal Brazilian gold miners scattered in the Guyanese jungle.

However, in 2014, the Brazilian and French governments came to an agreement to allow residents of Oiapoque and Saint Georges to obtain a special border card to cross the bridge and stay on the other side for 72 hours, but only in the border towns. Despite not yet completed work at the Brazilian checkpoint, and full reciprocity not yet being achieved, the Oyapock Bridge was finally inaugurated on 18 March 2017, and opened to traffic on 20 March. Together with private cars, pedestrians can cross it to experience the thrill of walking from Europe to Brazil.

In the 1970s, the Japanese region of Kansai was at a crossroads: most foreign exporters shipped their goods to Tokyo, the economic and...
By Gianluca Cedolin
Podcast  |  Transports

Before 1994, Great Britain and the rest of Europe had always been physically separated – well, unless you count approximately one million years...
By Gianluca Cedolin