The tunnel that links Britain to Europe - InfraJournal 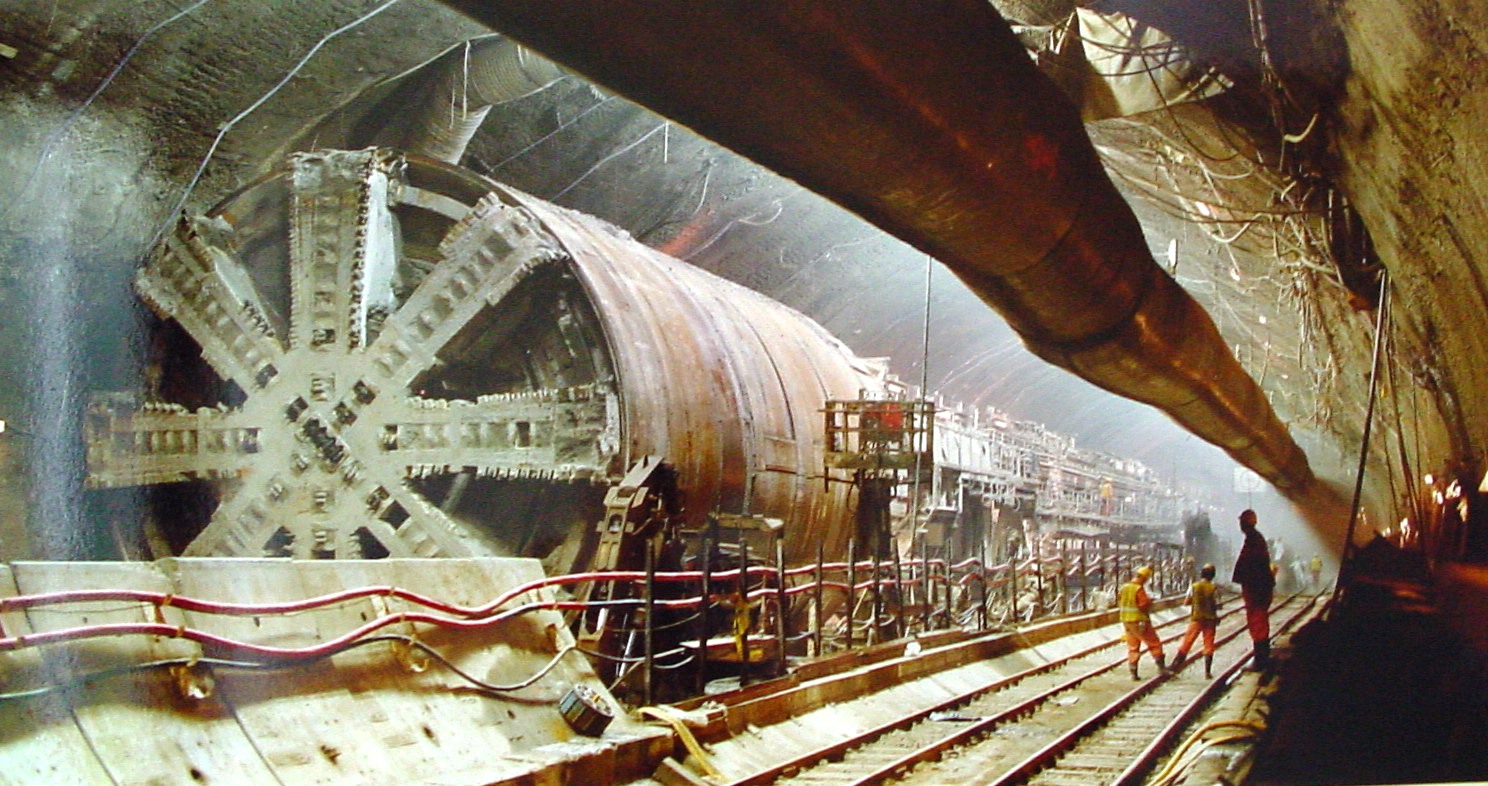 The fascinating story of the Channel Tunnel, the maxi-infrastructure that revolutionised travel and communication, cancelling centuries of conflict and political tension

One of the southern tunnel boring machines. The original uploader was Tambo at Hungarian Wikipedia - Transferred from hu.wikipedia to Commons by Tambo CC BY-SA 3.0

Before 1994, Great Britain and the rest of Europe had always been physically separated – well, unless you count approximately one million years ago, when the ice melted submerging the “bridge” of earth between the two regions, now known as Dover and Calais. Before then, in living memory, the only way to reach the United Kingdom was by sea. A situation that was strategical in many ways, as it protected Britons from foreign invasions. However, with the advent of globalisation, this was no longer a boundary that had to be conquered.

In fact, it is not by chance that since the XVIII century, engineers, scientists and scholars have asked themselves how they could create a transport link that would connect Britain to the continent. Today, while Brexit raises new economic and psychological barriers, an underwater, 38-kilometer tunnel physically joins the United Kingdom to the rest of Europe. An event that dates back to the 6th of May 1994, the day on which Queen Elisabeth II and French President, François Mitterand cut the ribbon on the Eurotunnel. But arriving at this historic unveiling took almost three-hundred years of planning, debates and setbacks, not only due to technical and engineering issues but also political and strategic questions, which saw Great Britain alternate between great enthusiasm and reluctance to connect itself to the rest of Europe.

The first known project dates back to 1751, when the Amiens Academy put out a tender to improve communication between France and Great Britain. The twenty-five-year-old French geologist, Nicola Desmarets, and future collaborator on the Diderot and D’Alembert Encyclopaedia, proposed to Louis XV to join the two kingdoms, either by going over the sea by means of a bridge and a dam or by digging a tunnel beneath the English Channel to allow the transit of carriages. His idea was not taken very seriously at the time, but approximately one-hundred years later his work was republished, together with an anthology of studies on the construction of an underwater tunnel, underling how, even prior to Desmarets, other scholars had also had the idea of a similar transportation link.

From a historical and technical perspective, it is fascinating to think that people could only ever have dreamt of building such a revolutionary infrastructure three hundred years ago. In fact, the Eurotunnel cost 10-billion pounds, required 1.500 workers, and took seven years to build. The digging of the tunnel required two gigantic, 200-metre long drills with a diameter of 8 metres, called a TBM or Tunnel Boring Machine (one in France and the other in England). To position the drills, the workers had to dig two enormous holes on the mainland, which were 75-metres deep and 55-metres wide, in which they had to drop two machines that had been specifically built for purpose. With its steel blade, the rotary disc could dig 36.000 tonnes of rock per day.

In any case, when Desmarets first proposed his project, he certainly did not imagine that it would take another 240 years before the two workers, Philippe Cozette and Graham Fagg, would shake hands beneath the waters of the English Channel, on the first of December 1990, the historic day in which the two ends of the tunnel finally met.

Although Desmarets’ project was rejected, there were other times in which conditions seemed favourable for the creation of this colossal work, however, none of these theories ever translated into practice.

It was not until 1802 and 1803, at the height of the Napoleonic Empire, that the first two organic projects finally arrived. French engineer, Albert Mathieu Favier, proposed a project with two overlapping tunnels: an upper tunnel, lit by oil lamps, for the transit of people and goods on carriages, with ventilation chimneys leading up to the surface, and a lower tunnel to channel any eventual water infiltration. Favier also thought up an artificial island where the tunnels could merge, and people could change their horses. An extremely interesting but highly complex idea. A year later, the British proposed to dig an enormous underwater tunnel where they could install a prefabricated tube. However, both projects were shelved when war broke out between France and the United Kingdom.

It would take another fifty years, thanks to the engineer and entrepreneur, Aime Thome de Gamond, before serious talks on the infrastructure resumed. His tunnel beneath the Channel was enthusiastically approved not only by Emperor Napoleon III but also by Queen Victoria who said: “If you can do it, I am ready to give you my blessing and that of every woman in England”. Many years of research and fundraising followed, as well as grandiose presentations at the 1867 Paris Expo. Finally, in the 1870s, purposely designed boring and digging machines were developed that dug almost two kilometres of tunnel – that was until the United Kingdom, concerned about national defence, unilaterally called a halt to the works. In all, 130 projects were put forward to connect Great Britain with France over the 19th century, but, other than by sea, the English Channel remained impassable. In the first half of the 1900s, after two wars and a financial crisis, the plans still remained on the drawing board, that was until the 1980s, when François Mitterand and Margaret Thatcher finally decided to give the channel tunnel project the go-ahead and works commenced in 1987.

Until 1994, only two British naval companies transported approximately 7-million people per year across the Channel at a handsome fee, also giving them a substantial monopoly. Since its inauguration, almost 500 million people have passed through the Eurotunnel, either as train passengers or by driving their cars, vans, camper and motorcycles onto special trains, in which the vehicles are parked in single file (a solution which is also better on an environmental level, given the level of pollution caused by boats).

Today’s tunnel consists of three parallel tunnels: two 7.5-metre-wide rail tunnels, set at a distance of 30 metres apart, separated by a third which serves as a maintenance or escape tunnel. The tunnel runs 38 kilometres below the sea and the 50-km journey between the two stations of Coquelles (near Calais) and Folkestone takes 35 minutes.

“We are at the Calais Eurotunnel. This hole marks the century, like the Cheops Pyramid signposted the era of the Pharaohs, or the Suez Canal defined the1800s”, said RAI correspondent Girolamo Mangano on the eve of the inauguration on the 5th of May 1994. “Here a bomb-proof tube of reinforced concrete unites Great Britain with Europe: fifty kilometres of darkness, filled with the British, French, German and also Italian technologies of the 21st century. Fifty metres beneath the sea is a concentrate of the entire world’s engineering knowledge. A historic, international and technological event, steeped in meaning”.

Cover image "One of the southern tunnel boring machines" By The original uploader was Tambo at Hungarian Wikipedia. - Transferred from hu.wikipedia to Commons by Tambo CC BY-SA 3.0, Link

French Guiana is the largest of the five overseas departments: regions belonging to France but scattered around the world. Located in the...
By Gianluca Cedolin
Transports  |  Mobility

It's a hypothesis, one so unbelievable that it doesn't even seem feasible. On the contrary, researchers and entrepreneurs have joined energies and...
By Infra Journal Newsroom
Podcast  |  Column

Until 1914, in order to move between the Atlantic and Pacific Oceans, ships had to reach Tierra del Fuego at the extreme tip of South America....
By Gianluca Cedolin
Interview  |  Mobility