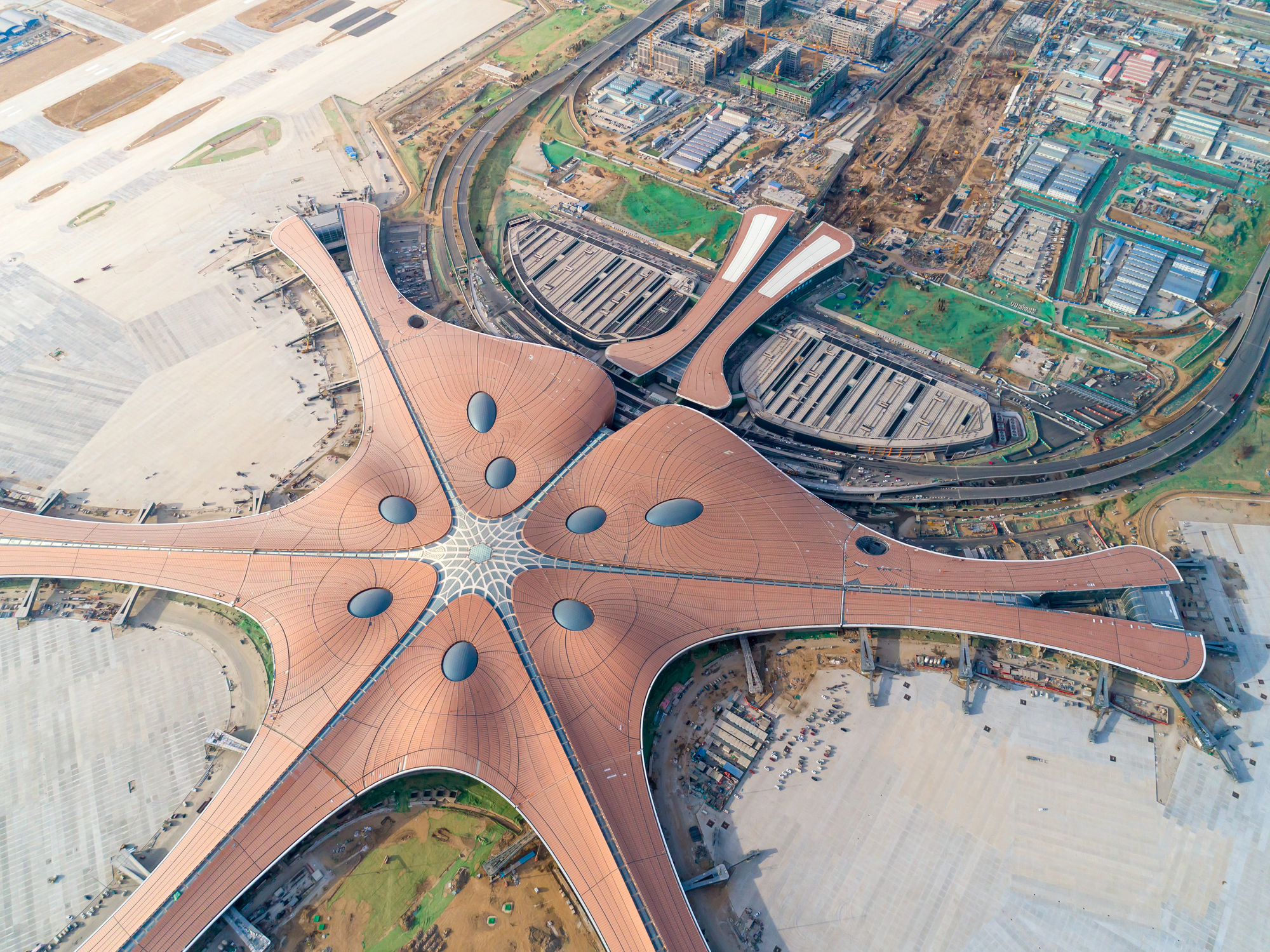 Built in less than five years, Beijing Daxing is the world's biggest airport and a triumph of new technologies. With its unique starfish shape designed by the study of Zaha Hadid Architects, the airport employs the latest new sustainable solutions

The People's Republic of China celebrated its 70th anniversary at the end of September and the beginning of October 2019. In addition to a concert, a commemoration of the fallen and a gigantic parade (in which 15 thousand soldiers and 110 thousand civilians marched to Tienanmen Square), the celebrations saw the inauguration of Beijing’s gigantic Daxing Airport, named after the district in which it is located to the south of the capital, a colossal project offering a tangible symbol of Chinese efficiency and a business card representing its present and future ambitions in the world. To permit completion in time for the anniversary, the work was begun and completed in a clamorously rapid time: not even five years after the laying of the cornerstone in the open countryside 46 kilometres outside the centre of Beijing on 26 December 2014, the world’s largest airport terminal, measuring more than one million square metres, opened its doors on 25 September 2019. More than 50 thousand workers contributed to its construction.

China spared no expense to convey the grandeur of the People’s Republic: 15 billion euro to build the airport and another 35 billion for connected infrastructures (motorways, high-speed trains, metro lines), also completed in record time. To design the airport, they commissioned Zaha Hadid, the world-famous Anglo-Iraqi archistar, who passed away in 2016 before she could see the completion of her final project.

The airport was created not only as a propaganda tool, but to respond to an increase in passenger traffic which had been forecast before the pandemic forced the world to change its plans, starting right here in China, where the government’s zero-Covid strategy has practically eliminated international arrivals.

More than 100 million passengers travelled through the city’s other airport, Beijing Capital, in 2018. When the new airport opened in 2019, it was expected that it would be used by 45 million passengers a year at first, growing to 72 million by 2025 and matching the figure of 100 million in the future. The overall increase in commercial airline traffic in the Asia Pacific region was expected to reach 1.8 billion passengers in the next 20 years, a growth rate comparable to that of all of the rest of the world put together. And despite the pandemic, almost 39 million passengers and 215,400 tonnes of freight and mail passed through Beijing Daxing airport in its first two years of operation, and a total of 314,600 flights took off or landed.

From above, the airport looks like a gold six-pointed starfish, containing large, brightly lit public spaces. Its radial configuration was chosen not only for formal reasons, but for functional purposes too, so that passengers would take a maximum of eight minutes to get from check-in to their boarding gate, despite the terminal's size. The structure, made almost entirely of glass and steel, contains five traditional Chinese gardens, complete with trees, wooden huts, fountains and stone bridges. Daylight filters through the high vaulted ceilings to penetrate the entire terminal. There are, of course, shops and retail outlets representing all the big international brands, from coffee shops to Italian haute couture.

What makes Beijing Daxing different from other airports, however, is above all its use of innovative technologies: over a hundred new patents were registered during the airport's construction, and 65 new construction techniques were used, in a triumph of robotics and artificial intelligence. Solar panels provide about 6.1 GWh of clean energy annually, the central heating system uses waste heat, and rainwater is channelled for outdoor use.

Facial recognition technology speeds up the queues, and there is 5G connectivity everywhere, while the control tower manages up to 300 take-offs and landings an hour, on seven runways, one of which is reserved for military flights, in the world’s biggest automatic air traffic control system. The structure also includes a railway hub measuring about 80 thousand square metres, from which it takes only 20 minutes to reach the centre of Beijing, just under 50 kilometres away. On the day of the inauguration, China’s President Xi Jinping took the train to Beijing Daxing, where he was welcomed with a triumphant military march, showing off yet another Chinese success story before the world.

In the 1970s, the Japanese region of Kansai was at a crossroads: most foreign exporters shipped their goods to Tokyo, the economic and...
By Gianluca Cedolin
Podcast  |  Column

Until 1914, in order to move between the Atlantic and Pacific Oceans, ships had to reach Tierra del Fuego at the extreme tip of South America....
By Gianluca Cedolin
Podcast  |  Transports

Before 1994, Great Britain and the rest of Europe had always been physically separated – well, unless you count approximately one million years...
By Gianluca Cedolin
Podcast  |  Transports

At the Paris Exposition Universelle of 1900, there were the films of the Lumière brothers, the escalator and...
By Gianluca Cedolin